Home / About the Enneagram / The Achiever 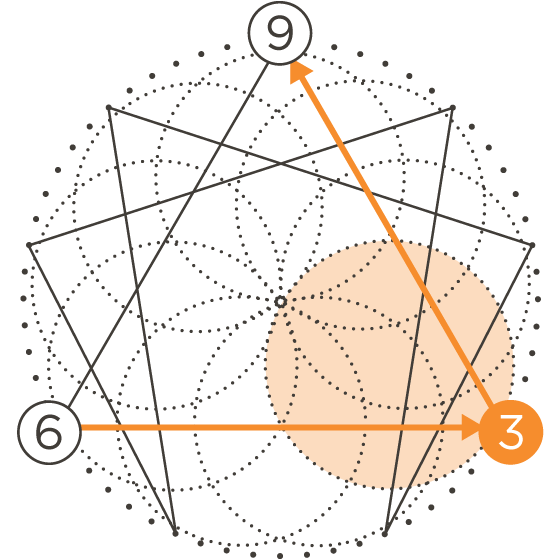 Basic Desire:
To be outstanding.

Focused On:
The world rewards “doing,” not just “being.” To be loved, I must rack up accomplishments and get things done.

Enneagram Type Threes are high achievers—they thrive on hitting goals and crossing tasks off a to-do list. Fast-paced, efficient and productive, they like to compete and expect to win. A Type Three wants to be viewed as valuable and successful; to feel this way, they make frequent, active efforts in both their work and their appearance. Type Threes are readily capable of changing the world. They also enjoy encouraging those around them to strive for more and better.

Many Enneagram Type Threes were commended for specific accomplishments as children. Perhaps their parents praised them when they scored perfectly on a test, or they gained recognition for athletic achievements.

Conversely, other Type Threes felt they were unable to secure approval from others without performing and attracting attention to themselves. They performed so they couldn’t be ignored.

In any case, Type Threes learned to associate acceptance and success with what they were capable of doing.

Threes appear to be solely focused on accomplishing things. What others might not see behind all this activity is that they truly desire to connect with others. They can complete every item on their to-do list but the connection with others is what gives them the feeling of validation they seek.

As a result of equating their achievements with their desirability, Type Threes are often compelled to hide any part of themselves that doesn’t mesh with the high-achieving persona they’ve created. In doing so, they become less connected to their inner self, focusing much more on how the outside world perceives them.

Like a self-fulfilling prophecy, Type Threes project a certain image to gain approval, and this approval reinforces the idea that people will only love them if they maintain this image. Therefore, they lean harder into the projection and further away from their true self.

Enneagram Type Three’s vice is vanity. It’s out of vanity that a Type Three will project a high-achieving image—whatever that may be for the particular situation they’re in. They imagine how they appear to others, rather than viewing themselves through their own eyes. This can leave them feeling as though they’re playing a role.

Type Three is part of the heart (or feeling) center, which regulates emotion. This may initially seem counterintuitive, given that Type Threes are often image-conscious and focused on “checking the box” on their unending to-do list. But remember that they home in on these activities seeking to be commended for their efforts. They hold tension in their chest, which they then funnel into action and movement.

The issues of each center revolve around a mostly unconscious emotional response to losing contact with their core self. Type Threes, as well as Twos and Fours which are also in the heart center, struggle with feelings of shame. Threes are attuned to shame as they deeply believe that without their list of accomplishments, they might not be worthy of the love and approval they seek. They may deny this shame and cope by projecting the image of success.

The Enneagram system allows for 3 subtypes in each type. They are Self-Preservation, Social Interaction and One-to-One Bonding.

The SP Three works hard to achieve a sense of security and believes it’s not enough to look good; they have to truly be good as well. SP Threes don’t actively seek the spotlight but still appreciate recognition for a job well done. To some degree, they push back against vanity, believing that vanity is counter to the image of perfection they’ve carefully created. SP Threes display workaholic tendencies and a mindset of “if I want it done well, I’ll do it myself.”

A Social Three seeks admiration and approval with more vigor than the other two subtypes. They are competitive, power-focused, strong and assertive, but chameleon-like in their ability to adapt to various social settings. Social Threes are confident leaders and enjoy being in the middle of the action. They think about what is best for the group, what looks best, and what will reflect positively upon them.

One-to-One Bonding Threes are focused on charm and beauty over security or prestige, but they pursue their goals with the same vigor as the other Type Three subtypes. Vanity is not viewed as detrimental, nor is it embraced; it’s simply a mechanism to create an attractive image. Less comfortable with self-promotion, this subtype focuses on giving support to and elevating the profile of people around them.

Each Enneagram type has two wings, which are the numbers on either side of the Type. One wing is usually stronger than the other and its qualities are more likely to bleed over into your Type.

A 3 with a 4 wing (3w4) is more introverted and likely to explore serious feelings. A 3w4 is more focused on delivering quality work than maintaining a particular image.

Enneagram Type Threes create energy and motivate high performances from those around them. They are confident and know how to position themselves and their companies for success.

Threes excel at sales, marketing, PR and branding. They may take on managerial or entrepreneurial challenges, or seek out careers that are traditionally well-regarded, such as law and medicine.

Team members may view Type Threes as self-serving and overly competitive. They also need to be cognizant of not overworking themselves. In their quest to do it all and be respected for it, they may work to the point of exhaustion.

Type Threes will Get. The. Job. Done. They create an energized work environment that brings out the best in people. At their best, Type Threes motivate high performance and help people and organizations be more successful; they are energetic, assertive, optimistic, efficient, charismatic, confident, persuasive, entrepreneurial, hard-working, persistent, and focused on goals and results.

Failure is a trigger for the Type Three leader. In the face of it, they can become abrupt, insensitive and phony. It may push them further into workaholic tendencies, leading them to over-identify with their self-image while suspending their true feelings.

Type Threes are excellent decision makers. With their bias toward action, they aim to eliminate barriers to achieving their goal and can make quick decisions to change course when needed. At times, this bias propels them into making a decision without adequate input from those around them who might offer helpful perspective.

Conflict is an inevitable presence in business environments. In healthy conflicts, Type Threes will slow down, listen, and allow others to contribute or provide input while working at their own pace. Unhealthy conflict pushes them to be impatient, irritable or angry at another’s slower pace. They may have trouble processing and showing emotion.

To successfully deliver feedback to a Type Three, a person should be prepared to acknowledge their hard work and success while showing value for the Type Three over their achievements. They may be restless or impatient, so it’s important to ensure they are focused and paying attention.

Type Threes who have to give feedback to others must remember to stop doing and start listening. It’s important to focus on the other person’s feelings as well as the matter at hand.

Type Threes excel at checking the box on their tasks, but it may be to the detriment of their emotional self. Keeping busy with an unending to-do list allows the Type Three to crowd out their real, deep feelings; however, it’s worth the effort for the Type Three to explore the motivation behind this behavior and access who they are beyond their public persona.

Beatrice Chestnut, PhD, suggests in her book The Complete Enneagram: 27 Paths to Greater Self-Knowledge that each type can benefit from self-observation, self-inquiry, self-reflection and self-development.

For Type Threes, this means:

Threes can also chart a course for growth and development by moving forward toward their Type Nine “Growth-Stress” point and moving back to their Type Six “Child-Heart” point. For example, this may take the shape of pausing to reflect on input from a broad range of perspectives before narrowing in too quickly on a particular direction, as well as having more faith in other’s problem-solving abilities.

The Enneagram Institute suggests that Type Threes develop their “social awareness” by getting involved in projects that benefit others more than themselves.

With continued development, Type Threes will come to learn that they do not need to perform for approval. They are worthy of love for simply being themselves.