You are here: Home / About the Enneagram / The Inquirer 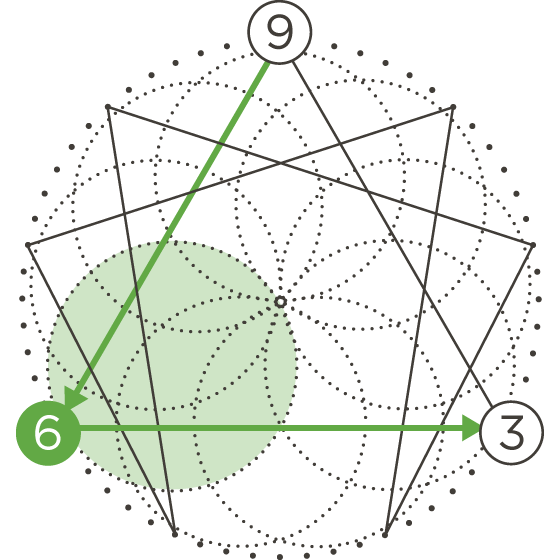 Focused On:
The world can be dangerous and threatening; people cannot always be trusted. I must seek security to avoid danger or defy security to face it.

Enneagram Type Sixes thrive when they feel safe, secure and have a sense of belonging. They are faithful, loyal and cautious. Although they exude warmth, affection, strength and calm, they often doubt themselves and others; Sixes want to connect with people and yet are skeptical of them.

Type Sixes both respect and challenge authority. They can be fearful and insecure, or fearless and confident. Making decisions can be hard and they often second-guess themselves. This type is always looking for what can go wrong—and then preparing for it.

Enneagram Type Six Focus: Preparing for What Can Go Wrong

In many cases, someone with a Type Six personality faced a threatening situation as a child, often in the form of an unpredictable parent. The child learned to be prepared for a shift in the relationship and coped with this by monitoring situations closely, always on the lookout for a sign that change was afoot.

Because of this, Type Sixes have an unusual perspective on authority; they are both looking for a truly good authority figure while also feeling suspicious of anyone who might play that role.

Type Six’s vice is fear, which can be conscious or unconscious. A Type Six experiences this fear as obsessive worrying, self-doubt, uncertainty or guilt. Sixes are prone to anxiety as well, particularly in social situations when they’re concerned about being judged by others. A Type Six reacts to fear in one of three ways: attacking the situation forcefully (fight, counterphobic), withdrawing from it (flight, phobic), or complying with any set rules (freeze).

Sixes protect themselves from fear by projecting onto others. Rather than acknowledging their own uncomfortable feelings, they may imagine they are coming from someone else.

Type Six is part of the head center, which regulates cognitive activities. These Types filter the world through their thoughts. While this intelligence is necessary for analysis and reasoning, Sixes spend considerable time thinking about what could go wrong and strategizing for how to handle it.

The issues of each center revolve around a mostly unconscious emotional response to losing contact with the core self. Type Sixes, as well as Fives and Sevens which are also in the head center, struggle with feelings of fear as the dominant emotion. The Type Six is confronted by fear as both their vice and their core emotion.

The Enneagram system allows for 3 subtypes in each type. They are Self Preservation, Social and 1:1 Bonding.

The SP Six is the most phobic of the three Six subtypes. They are driven by a fear of not being protected. This drives them to develop friendships with many people to create a wall of protection around themselves. Externally, SP Sixes project warmth, tenderness and peacefulness, but inside, they feel fear and anguish of losing the protection these relationships provide them. They often feel compelled to “be good” so as not to anger others or risk alienating them.

Social Sixes find comfort in authority and obeying the rules. They fear disapproval and therefore work hard to adhere to the guidelines of whatever authority figure they rely on. This obedience helps them feel safe and cope with their inherent anxiety. The Social Six can become too sure of things when they place their trust in an authority they assume is infallible. They have no tolerance for ambiguity and uncertainty.

The 1:1 Bonding Six is the most counterphobic of the three Type Six subtypes. Believing that “the best defense is a good offense,” they turn away from fear and toward strength. That doesn’t mean they are fearless, but they would rather confront risky situations instead of hiding from them. 1:1 Bonding Sixes often appear physically strong, forceful, intimidating and rebellious, but they also fear making a mistake and the consequences of it.

A 6 with a 5 wing (6w5) is more serious and traditional with a stronger bent toward research and analysis.

A 5 with a 7 wing (6w7) is more relationship-oriented and extroverted than the 6w5.

Enneagram Type Sixes excel at research and analysis. They anticipate problems and are always prepared for them. Additionally, they keep their teams on-track and are often considered go-to people in a crisis.

With their attention to detail, Sixes gravitate toward jobs that require planning and problem solving like detective work and accident investigations. They may also excel as emergency personnel, CIA or FBI agents or psychotherapists.

A Six can be perceived by teammates as a “negative Nellie,” due to them always looking out for worst-case scenarios in an effort to be prepared for anything.

Enneagram Type Six leaders are strategists who create tools and systems that empower workers to solve individual and organizational problems. They are insightful, responsible, cautious, loyal, forward-thinking and intellectual. As a leader, they may also find themselves playing devil’s advocate in an effort to anticipate all potential future issues.

When faced with instability, Type Sixes can become indecisive, worried, anxious and hyperanalytical.

Similar to Type Nines, decision making is difficult for Type Sixes. The Six tends to question everything, including themselves; as Beatrice Chestnut, PhD, shares in The Complete Enneagram: 27 Paths to Greater Self-Knowledge, “while Sixes are great critical thinkers, they can get stuck in doubt, endless questioning, and overanalysis.” They often seem to be ambivalent about taking action.

In a perfect world, the Type Six is aware of their tendency to project their feelings onto someone else, and therefore can recognize when they’re doing just that and communicate their personal responsibility for their own thoughts. It’s important for them to verbalize their concerns, rather than overanalyze them, and work through them.

When giving feedback to a Type Six, keep it spontaneous. Alerting a Type Six that feedback is coming will send them into a tailspin of worry and anxiety. They may need time to process afterwards; phobic Sixes may become defensive as well.

A Type Six giving feedback to someone else must take responsibility for it, speaking confidently and with conviction. This is not the time to be ambivalent! The Six must access their own authority and have faith that what they are communicating is correct while also taking care not to appear sarcastic or accusatory.

The Enneagram Type Six is thoughtful and loyal to those they trust; however, they must work to overcome their fear and the paralysis that can accompany it. It’s important to work on trusting their instincts and owning their power.

Dr. Chestnut suggests in The Complete Enneagram: 27 Paths to Greater Self-Knowledge that each type can benefit from self-observation, self-inquiry, self-reflection and self-development.

For Type Sixes, this means:

All Enneagram types can evolve by moving ahead to their “Growth-Stress” point and back to their “Child-Heart” point. For the Type Six, they can move ahead to Three, working against the fears that plague them and focusing on productivity. Conversely, the Six can retreat to Nine to balance their focus on planning and preparing with the Nine’s focus on comfort.

Managing anxiety can be helpful for the Type Six. Whether they engage in meditation or relaxation techniques, visualization, exercise, visiting with a therapist, or something else, relieving themselves of some anxiety reduces their stress.

Although the Six is not necessarily a pessimist—rather, they are usually playing devil’s advocate when they seem contrary—engaging in positive thinking will be to their benefit. It may help them consider that the worst-case scenario they’ve dreamed up might not be the most-likely scenario.

Enneagram Type Sixes must learn to recognize their reaction to fear, be it fight, flight or freeze. When they confront their fear and push past it, they become a powerful example of wisdom and courage.

Ready to Bring Out the Best in Yourself and Your Team?

“With Deni as my executive coach, I have developed greater self-awareness. Our work with the Enneagram provides me with the tools I need to understand why I do what I do. With these tools, I am honing my mentoring and relationship skills.”