Home / About the Enneagram / Enneagram Type One: The Assessor

Enneagram Type One: The Assessor 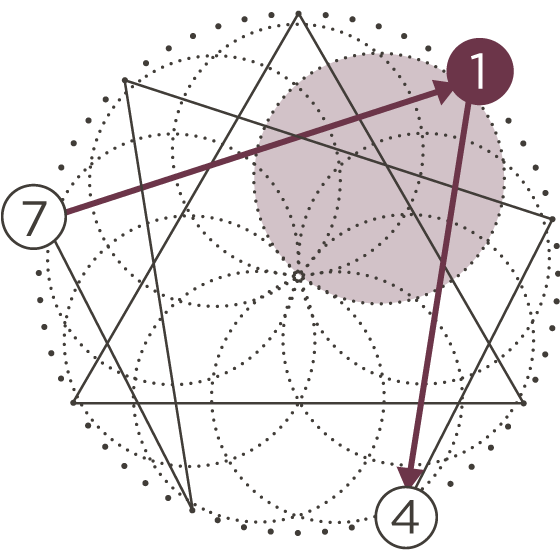 Basic Desire:
To be good, virtuous, and fair.

Focused On:
I must gain worthiness and love by being as perfect as possible. The world judges and punishes the bad.

Enneagram Type Ones thrive in an orderly environment and like to do things right. They clearly distinguish between right and wrong. They are principled, orderly, rational and responsible. With a sense of purpose and desire to improve the world however they can, Type Ones strive for higher values, even if it requires personal sacrifice.Type Ones like to follow rules and procedures. They are conscientious, detail-oriented and focused on perfection. They stick to their own high standards and have an inner critic who keeps them on track. It’s difficult for a Type One to relax.

Type One Focus: Perfection, being right and making things right.

Type Ones experience pressure early in life to behave and perform perfectly. This can be due to criticism from a parent or trusted adult, or another form of chaos in the family. The One child takes it upon themselves to provide the structure and rules they need while internalizing the idea that if they stick to these parameters, they’ll perform well and be praised.

This internalized idea, which begins as a way to keep the Type One safe, over time become an inner critic, driving them to more rigidity and structure. It also spills beyond the self, leading to the Type One becoming increasingly critical of the outside world too.

Type One’s vice is anger—but not the aggressive kind that can be seen more easily in other types like the Eight. Type One’s anger is quieter, expressed more often as resentment and self-righteousness. They rarely appear outrightly angry; instead, they seem to be overly civilized, tense and demanding. Enneagram Type Ones only appear outwardly angry when they feel it is appropriate and justified to express those feelings.

There are two primary sources for the One’s anger: the frustration caused by always trying to be perfect, and other people’s failure to meet the high standards the One has set.

Type One is part of the body center, which regulates instincts and actions. Type Ones can appear to be very head focused, given their preoccupation with judgment. However, Type Ones do experience impulses and instinctual feelings that are essential to the body center; they are just more likely to squash them with their well-developed critical thinking.

The issues of each center revolve around a mostly unconscious emotional response to losing contact with the core self. Type Ones, as well as Eights and Nines which are also in the body center, struggle with feelings of anger. The Type One is confronted by anger as both their vice and their core emotion.

The Enneagram system allows for 3 subtypes in each type. They are Self-Preservation, Social Interaction and One-to-One Bonding.

The SP One is the most repressed with their anger. They disconnect with it to become tolerant and gentle, but the undercurrent of anger remains. They want everything to be planned in advance and tightly controlled. They feel anxious regularly and this sometimes manifests as obsessive thinking and the development of rituals and behaviors that allow them to feel in control. SP Ones remain on high alert so long as they believe they are able to have an effect on a situation by doing so.

Social Ones desires to be the perfect example for those around them. They appear rigid, as they believe they know the exact, correct way to behave and act. Their anger is colder than the SP One; when angry, they appear exceptionally controlled and distant. They are known to take on the role of teacher in an attempt to role model proper behavior, but this can give them a “know-it-all” appearance. It’s difficult to convince a Social One that another’s point of view is valid or right.

The One-to-One Bonding One tries to help others be perfect. Less concerned about themselves, they want everyone around them to be continuously improving. They are passionate and excited about this but can also be controlling and demanding as they think they know what’s best for everyone. There’s an intensity to the One-to-One Bonding One that isn’t present in SP and Social Ones and they can appear outwardly angry when others don’t share their desires and motivations.

A 1 with a 2 wing (1w2) is more extroverted and interested in sharing their beliefs and values with others. They desire to help others do what is right.

A 1 with a 9 wing (1w9) is more likely to share their values in writing, rather than verbally. They set a good example with little concern for their public image.

Type Ones at Work

Enneagram Type Ones are known for quality and detail. They lead by example and set the standard for others. They can be self-critical and react strongly to their own mistakes or infractions, and will voice their opinions to affirm their beliefs. Team members can see Ones as inflexible and judgmental.

With their desire for perfection and need to follow the rules, Type Ones do well in jobs that require the same. They may be attracted to positions in quality management, accounting or editing.

Enneagram Type Ones have strong, natural leadership capabilities. Their want for perfection can help others get the job done properly. They’ll work hard to find the best way and their clear, precise leadership provides clear paths toward a team’s goal—which they’ll achieve with integrity and excellence.

Criticism can be a trigger for the Type One leader. When faced with it, they become nit-picky, rigid, reactive and impatient.

Decision-making can be tough for Type Ones because they want to be correct. They want to complete as much research as humanly possible before making the call. They may procrastinate when it comes to making a decision out of fear that they’ll be wrong.

In healthy conflict, the Type One considers issues without self-criticism or accusations. They can relax their protocol, rules and black-and-white thinking to let the conversation unfold, open to possibilities rather than a right or wrong conclusion. In unhealthy conflict, they become critical of themselves and others while appearing rigid, tense, indignant and emotional.

Giving feedback to a Type One is best managed with acknowledgement of their integrity and responsibility. Be clear, fair and nonjudgmental while providing specifics and examples, and be prepared for an intense reaction.

A Type One giving feedback to someone else must speak without anger, resentment, blame or self-righteousness. They must watch their own intensity, black-or-white thinking and need for perfection. It’s also important that the One be mindful that they not apply their own strict internal standards to another person in their desire to make them be perfect.

Continued Growth and Development for Enneagram Type Ones

Enneagram Type Ones are already very focused on continuous improvement as they strive for perfection. Implementing the right forms of improvement will allow them to grow past the bounds of their Type.

Dr. Chestnut suggests in The Complete Enneagram: 27 Paths to Greater Self-Knowledge that each type can benefit from self-observation, self-inquiry, self-reflection and self-development.

For Type Ones, this means:

All Enneagram types can evolve by moving ahead to their “Growth-Stress” point and back to their “Child-Heart” point. When Type One moves ahead to Type Four, they can access the Four’s creativity and broader range and depth of feeling; this path lets the One live more authentically. If the Type One goes back to their “Child-Heart” point, Type Seven, they can tap into the playful spirit that they keep under control, often from a young age.

Enneagram Type Ones have the potential to demonstrate to others how to take a vice—anger in this case—and transform it into something that propels them forward toward a higher ideal.