Home / About the Enneagram / The Protector 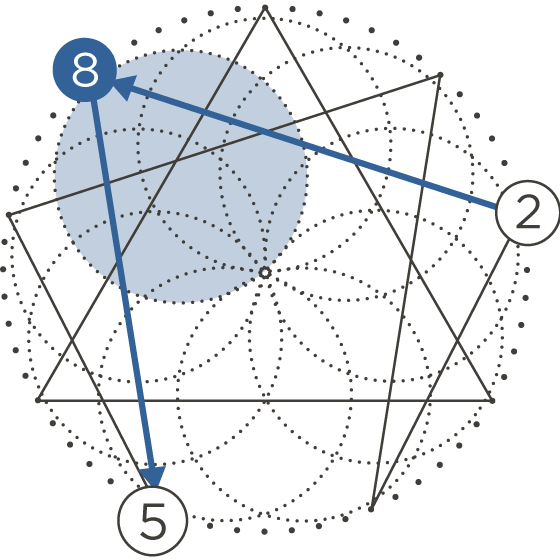 Basic Desire:
To protect myself and control my own course in life.

Focused On:
The world is unjust and power imbalanced. I need to dominate so I am not controlled, and people cannot impose their personal truths on me.

Enneagram Type Eights thrive when they can take charge, be protective and feel powerful. They are direct, honest, open and straightforward. They have a large energetic presence. Eights are always on the lookout for injustices and can overcome any adversity. They believe what doesn’t kill them makes them stronger.Eights establish their dominance so others cannot control or have power over them. Their confidence hides their vulnerability. They have a lust for life and want to experience everything to the fullest. The motto of the Eight is “too much of a good thing is almost enough.”

Enneagram Type Eight Focus: Control. They want to be in power.

Type Eights were often raised in environments of conflict. They had to grow up faster than other children to survive. As such, they developed personas of strength and power to protect themselves from a world that did not offer protection itself. They had to rely on themselves to meet their needs and became a forceful, controlling presence early on.

With this early assumption of power and control, the Eight is disconnected from their vulnerability. The Eight had to disown these feelings in order to preserve their façade of strength and authority. When they deny these feelings, the Eight is able to maintain their belief that they are in control and will win any battle they face.

Enneagram Type Eight’s vice is lust. For the Eight, this is a lust for big experiences across all activities—loud music, fast cars, frequent activity. They are passionate and seek out intense activities and stimulants. They seek these experiences without apology and will defend their desires and impulses.

Type Eight is part of the body center, which regulates instincts and actions. They lead with their gut, relying on instincts and projecting an image of power. Others may perceive the Eight as physically threatening, even when there’s no intent to be so on the part of the Eight. They simply have a large, commanding presence.

The issues of each center revolve around a mostly unconscious emotional response to losing contact with the core self. Type Eights, as well as Nines and Ones, which are also in the body center, struggle with feelings of anger. The Eight is connected to their anger but may act on it impulsively without considering the consequences.

The Enneagram system allows for three subtypes in each type. They are Self-Preservation, Social Interaction and One-to-One Bonding.

SP Eights work hard to ensure they can meet their own needs. They are not concerned with what’s considered socially acceptable to secure what they require. They focus on survival and protect themselves more than the other Eight subtypes. SP Eights don’t want to depend on anyone else to meet their needs and if someone expresses concern that this level of independence isn’t possible, the Eight can easily dismiss them.

Social Eights are still inclined to rebel against social norms but they also want to protect those around them who need it—mainly to inspire those people to be loyal to them. They appear to be more mellow and helpful than other Eights but still display the same bias toward action and leadership. They also prefer the power of a group versus many individual relationships; in relationships, they may be hesitant to show their commitment.

The One-to-One Bonding Eight is the most emotional of the three Eight subtypes. While very smart, they are driven more by feelings than intellect. Outspoken, rebellious, magnetic and provocative, the One-to-One Bonding Eight feels proud of their comfort going against the rules. They desire to possess any environment they’re in and capture all the attention. They expect loyalty from their partners but may not always give that in return.

An 8 with a 7 wing (8w7) is dynamic and direct—the stereotypical 8. They are impulsive with energy to burn.

An 8 with a 9 wing (8w9) is more reserved. They too are natural leaders like the 8w7, but they do so with a more collaborative approach.

Enneagram Type Eights are leaders who can take charge in almost any scenario. When leadership is lacking, they will step in to fill the void. They like to do things their way. Team members may see them as aggressive or intimidating.

Eights do well in roles that are fast paced. They may be drawn to jobs outdoors that keep them moving and connected to their body center.

Type Eights are powerful motivators who create forward momentum in an organization to strategically meet objectives. They ensure the right people are in place to get the job done. They are bold change-agents who are powerful, strategic, direct, protective, assertive and empowering.

The Type Eight leader is triggered by weakness. When confronted with it, they can become controlling, brash, vengeful, impatient, judgmental and disdainful.

Enneagram Type Eights trust their instincts and are quite decisive. In their mind, things are black or white; there’s no room for grey. Ambivalence is annoying to an Eight and waiting to make the call or take action is frustrating. They may overstep and make decisions for other people out of impatience if they’re taking too long to decide for themselves.

In a healthy conflict, Eights will slow down, listen patiently and let their guard down to fully engage in the others’ thoughts, feelings and ideas. They must remember that there are eight other types and one isn’t better or more correct than another. When a conflict is unhealthy, the Eight can be loud, aggressive, accusatory, overwhelming and intimidating.

Giving feedback to a Type Eight requires clear, honest and direct communication. Changes must be discussed firmly, positively and without blame. Encourage the Eight to talk about feelings and be prepared for push-back.

For a Type Eight giving feedback, they should look for a win-win and take care not to give feedback when angry. The Eight should be willing to ask about the other person’s thoughts, feelings and perceptions, and talk about their own insecurities too.

Type Eights are intense and quick to act. With continued growth and development, they can develop skills to temper this behavior with more thinking and feeling.

Beatrice Chestnut, PhD, suggests in her book The Complete Enneagram: 27 Paths to Greater Self-Knowledge that each type can benefit from self-observation, self-inquiry, self-reflection and self-development.

For Type Eights, this means:

Enneagram Type Eights can grow and develop by moving forward to their Type Five “Growth-Stress” point and back to their Type Two “Child-Heart point. Moving to Five means balancing the Eight’s constant motion with the restraint of Type Five. Retreating to Two allows the Eight to open their heart, feel empathy for others and behave selflessly.

The Enneagram Institute suggests that Eights practice behaving with self-restraint, showing others that the root of their power is not their force, but their “ability to inspire and uplift people.”

Eights must work to accept that everyone has feelings of vulnerability and there’s nothing wrong with feeling and showing them. Denying those feelings keeps the Eight blocked from assuming the full power they possess.

When the Eight can grow past their lust and instinct, they have the potential to become purpose-driven leaders that others want to follow.